The Limitations of Conflict Management

Conflict management techniques are really useful, but not in every situation. 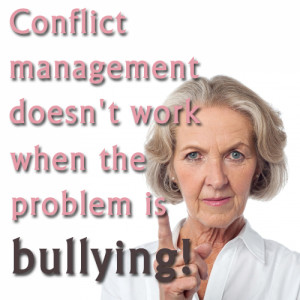 Not every interpersonal problem is a conflict. Conflicts are basically people disagreeing and not figuring out how to agree. This does happen, but often, what looks like a conflict is actually something else entirely.

If someone is passive aggressive and withholding information in the workplace, then yes, they are going to be in conflict with a lot of people. There will be disagreements that are pretty much impossible to resolve. We are tempted to employ conflict resolution tactics to resolve these conflicts. The problem is that you can’t resolve a passive aggressive problems  or bullying/harassment problems with conflict resolution. Here’s why.

A passive aggressive person avoids conflict. Their aversion to conflict is great enough that they will go to great lengths to avoid seeming to have a conflict. Put them in a conflict resolution mediation situation and they will acquiesce to everything that is said, and then continue being passive aggressive. Mediation won’t change anything. Why? Because that’s how they have learned to cope. They avoid conflict and “win” and “control” what is happening in other ways.

Bullying also can’t be fixed with conflict resolution because what is happening isn’t a “conflict.” It’s bullying. Sure, the person who is being bullied might respond to the bullying by entering into a conflict with their bully. But the underlying problem is that one person is behaving inappropriately (which is why it’s bullying and not conflict) and that bullying/harassment behavior is setting of a chain reaction of bad behavior between them and their victim. Conflict resolution assumes that both sides are equally guilty. But in a bullying situation, one side is to blame and the other is responding however poorly to that bad behavior.  Conflict resolution exacerbates bullying/harassment situations so it’s critical to understand when to use conflict resolution and when not to.

I gave a talk to a group of coaches a few weeks ago and we discussed this very dilemma. For me, I don’t consider using conflict resolution until both parties are behaving civilly. Because let’s be clear. Disagreements aren’t a problem. They are to be expected in normal human interactions. It’s how we respond to those disagreements that matters. If we respond civilly, there is no problem. There is only a problem if one or both parties responds by behaving badly.

My first task is to get the parties involve behaving civilly. Only after they start behaving properly and eliminate the bad behavior (whether it is passive aggressive or outright bullying), can we consider conflict resolution.

Always deal with the inappropriate behavior first. Don’t allow people who are behaving inappropriately to get away with it under the guise of conflict. If they really are in conflict fine. You can deal with their conflict, but only if they start behaving like the professionals they are. Conflicts are no excuse to behave uncivilly.

People who are capable of being civil, will try being civil and will work with you to resolve the problem. People who aren’t, because they have passive aggressive control issues or because they are chronic and habitual bullies, won’t behave civilly because they don’t know how and this will tell you pretty much everything you need to know about what is really going on.

To learn more about why conflict resolution doesn’t work when the problem is bullying, check out this course: https://humanistlearning.com/conflictresolution/ (HRCI/SHRM approved)