Over the summer, I had the pleasure of attending a meeting of the International Humanistic Management Association. I met some wonderful people - including Benito Teehankee from the Philippines. I will be interviewing him for the management association in October  - so be sure to sign up for my mailing list - to get notified of how to participate.  (Links below). 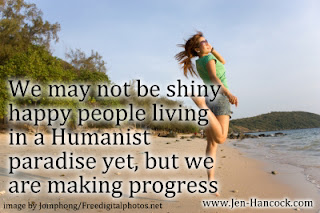 After the meeting - he sent me this message: "I'm fascinated with your conceptual background -- a humanist behaviorist. I used to think that this was a contradiction in terms because of Skinner's focus on extrinsic motivators but I'm very open to learning from you."

This question has to do with the practice of psychology and competing schools - humanist and behaviorist. I am not a trained psychologist. I am a philosophic humanist. But I do understand and integrate the science into my work. Anyway - here is my response.

Regarding the humanist/behaviorist thing. It’s not either or anymore – it’s both.   What did Blaise Pascal say? “A man does not show his greatness by being at one extremity, but rather by touching both at once.”  And the other quote – by I have no idea whom – The opposite of a great truth – is often another great truth.  That is the case here.

I have yet to talk to a psychologist who doesn’t recognize this reality even if they don’t spend time pondering it.  When I spoke to the psychologist at my son’s school about it (she uses my book on bullying), I joked about the irony that a Humanist was teaching a behaviorist approach. She thought it was funny too, but agreed – it’s not either or – it’s both. You can’t really practice clinical psychology and help clients without using behavioral techniques. And if you try to – you are going to be guilty of malpractice. Both the humanist approach and the behaviorist approaches are true and have been integrated.  The academic debate – is basically dead. Yay Science!

As for the agency problem - neuroscience is once again putting agency into question which theoretically threatens the foundation of humanism. But I think what will probably be found is similar to the behaviorist non-problem problem.  It doesn’t negate agency as there is clearly a feedback loop as learning occurs somehow. It’s more that our understanding of agency – is that – our agency has limitations – and neuroscience is just going to end up explaining those limitations in a more biological way than behaviorism did. But the limitations on agency we are talking about – are the same limitations – just being looked at through a different scientific lens.  Regardless, the humanists will have to adapt to the science as they always do once it’s incontrovertible.

I am also ok with uncertainty, ambiguity and seeming contradictions as I understand what might seem like a contradiction – isn’t – if both things are true. So instead of fighting the truth of what science finds, I instead – try to figure out how to integrate the information into a new understanding of reality.

Some truths seem really counter-intuitive at first, but once we adjust to the reality and integrate it – we can’t understand how we even muddled through with our old understanding as the new understanding is so much more full.  Examples of this include coming to terms with plate tectonics and realizing the earth is spinning. Once you get over the – no way – it can’t actually work that way – and accept the reality of what we have learned through science, our understanding of reality is so much fuller. And that gets us back to philosophy.

Which brings me to Viktor Frankel and his logotherapy (get his book - The Unheard Cry for Meaning). Which is a philosophic therapy. Philosophic therapy on it's own - can be very beneficial. So is behavioral therapy. Both work. But when you combine logotherapy (philosophy) with behavioral therapy (science) - you get therapy that works REALLY well.  It's not either or - it's both. Together - for a more powerful solution that actually works.

To learn more about how to integrate philosophy and science into behavioral based solutions - check out my courses and books: https://humanistlearning.com/jennifer-hancock/