How to create a school for Humanists – focused on playful learning – middle ground. 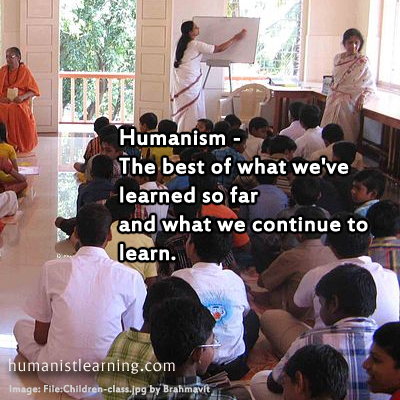 I am a Humanist parent with a special needs child in the public school system – where he will take 90 ish standardized tests this year. He’s in 3rd grade.  He’s doing well and very well supported in this school.

But that doesn’t stop me from dreaming of something better. I think most parents are like this – at least the ones I know.  We want our child to have an ideal education. As I build my humanist learning company – I sometimes dream about creating a humanist school for children. One that takes what we know about child development and how children learn and put it into practice so our kids will not only enjoy learning, but thrive as children and as the adults they will become.

So what have we learned?  Well – to quote an article that quotes a study (see: http://www.thisviewoflife.com/index.php/magazine/articles/playful-learning-preparing-21st-century-children-for-a-global-world) it is pretty fair to conclude, “Children did not evolve to sit quietly at desks in age-segregated classrooms...”

Yet, what we need kids to learn – reading, writing and arithmetic – have to be taught formally – they are not skills that can be learned through osmosis or just by watching others. These are not physical skills, like using a bow. They are mental skills. We can’t see how someone else thinks, we have to be told.

Enter the concept of “playful learning.” Playful learning is guided play.  Freeplay – kids explore on their own. Lecture – involves no play. Guided play – is play – that is guided so that kids learn stuff you want them to learn WHILE they are playing.

Here is a quote from the article:
“We and Kelly Fisher (with Nora Newcombe; 2014) wanted to see whether preschoolers would best learn the properties of geometric forms if they were told these properties (think didactic instruction), versus if they were guided to discover them (think guided play), versus if they were simply given geometric forms to play with (think free play). Learning that triangles, for instance, must have three sides and three “corners” seems easy until children are presented with non-standard forms like right or scalene triangles. Then, if they haven’t figured out what makes a triangle a triangle, they are lost.”

“After experiencing these three different kinds of pedagogy in the controlled experiment, 4-year-olds were all able to identify four different, standard variety, geometric forms. It was on the non-standard forms that the children who had learned with guided play – where the teacher followed their lead – shined. The children who had didactic instruction or free play bombed, while the children who had been active participants in their own learning did marvelously. Active, engaged, and meaningful learning creates learners who can extend (“transfer”) what they know to new instances.”

For a video of the interview with these researchers – visit: https://www.youtube.com/watch?v=0Ppw_YfqehM  from This View of Life.
Posted by JentheHumanist