It takes a village

Humanist parenting – collectively – even when the other parents aren't humanists. 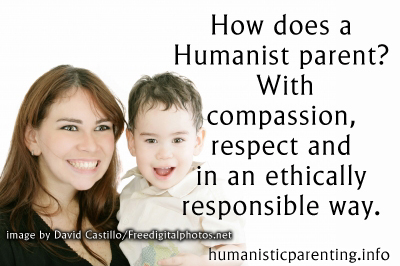 I live in a nice neighborhood. We have a lot of kids, they all run around playing together. My son has the requisite scrapes and bug bites one would expect of a kid who spends time playing outside with friends.

And, as is to be expected, not all the kids are nice and wonderful. It happens.  And I think my approach as  humanist has really helped. Not just me, but the kids and the other parents.

You see, I don’t assume that just because a kid is acting inappropriate that there is anything wrong with them or that their parents are horrid and teaching them to be bad. I assume, instead, that they are a little kid who may have picked up some bad habits. Sure, it could be caused by bad parenting, but then again, that’s an assumption.

Whenever we have had problems, I go to the other parent and talk to them.  I realize this is a shocking thing to do but here’s what happens. We, together, end up making plan to help their kid learn how to behave better.  I know I would want to know if my son was being a horrid little shit to other kids. And so far, the other parents have appreciated knowing what their kid has been getting up to while they are out of sight.

It really does take a village and it takes compassion and trust and a willingness to reach out and help one another to help these kids learn how to maximize their strengths while learning how to be fair and kind to other kids at the same time. Because in every instance, the problems were a result of a highly intelligent child learning they can manipulate others.  That’s heady power. And with great power comes great responsibility. Our jobs is not to shut energy and talent down but to help the child learn how to channel that power for good.

And isn’t that a much more proactive and powerful way to think about interpersonal dynamics your kid is experiencing?   Will this work every time?  No. But unless you reach out to the other parents to see if that is what they want for their kid, you will never know. Don’t write off the obnoxious kids without learning more about them and their families. Just don’t.  Extend to them the same compassion you would want for yourself.

Email ThisBlogThis!Share to TwitterShare to FacebookShare to Pinterest
Labels: a humanist, compassion, dealing with problems, humanist parenting, humanists, it takes a village, learning