Self Care Lessons from a GOAT

I watch Sumo. I have been a sumo fan for decades now. One of the current Yokozuna is literally, the greatest wrestler of all time. Hakuho has won more tournaments than anyone else in the history of the sport. He is a joy to watch wrestle. 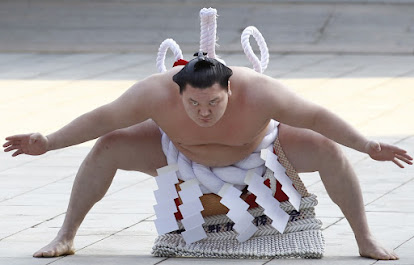 One of the reasons he is so great, is he takes self care seriously.  When he gets injured, he allows himself to heal. This is one of the keys to his success. He doesn't try to play through his pain. He stops, and withdraws from the tournament and heals.

He also doesn't push himself while he is healing. He has said, he doesn't work out when he is out resting. He rests and heals. That's it.  And when he comes back - he comes back in good form and just - wins. Everything.

He has won 16 tournaments undefeated - twice as many as any other wrestler in the entire history of the sport.

There is simply no one in the entire 2,000 plus year history of the sport as good as Hakuho. He is really the greatest of all time (G.O.A.T.)

And again, the secret to his success is - he rests when he needs to.

He just won the July tournament 15-0.  Which is amazing. He took the Jan, March and May tournaments off. He rested for 6 months. We didn't see him at all. The Sumo association was calling on him to retire if he didn't return to the ring. He didn't let that pressure get to him. He wasn't competing, because he didn't feel like he was healthy enough to compete.

When he came back, he won it all. And he won it - by defeating Teronofuji in the final bout of the tournament. Teronofuji and Hakuho went into that bout - both with a 14-0 record. Teronofuji was just named Yokozuna. He's REALLY a good wrestler and has been dominating in Hakuho's absence. Watching these 2 men, vie for top spot, was one of the greatest tournaments of all time!!!

If you want to be successful, take a lesson from the greatest of all time, in a sport with a 2,000 year plus history.

It’s ok to take care of yourself.  Playing injured isn’t good for you.

If you need to heal, take time to heal so that you can come back stronger.

It really is ok to take care of yourself when you need to. It's better to rest and come back and play at full strength, then to just - put in mediocre performances because you refuse to rest and heal - I'm looking at you Tochinoshin.

Oh - and Teronofuji?  The guy who just became Yokozuna? He took a full year and a half off when he was at the top of his game a few years back. He went all the way down to the lowest of the lowest ranks of sumo and had to work his way back up to the top division. He made it to Yokozuna. Had he tried to play through, he would have ruined his career. Instead, he took over a year to recover, and took the hit in his standing but was able to come back to become one of the highest ranked rikishi in the sport currently. His only competition right now is Hakuho.