Dealing with passive aggressive toxic women in the workplace

I got this question from a woman I know. She was commenting on a post about how high IQ people need help leading because it's not enough to know what needs to be done to fix a problem, leadership skills involve helping rally people to collaborative problem solving. 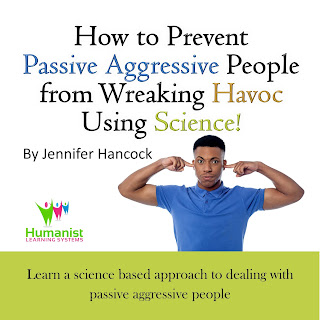 A friend of mine had this to say:  I agree with your premise. I don't want leadership types to dumb down so what to do? And a similar issue, why do bright people, women more than men, seem to be so passive aggressive when it comes to problem solving with each other. Might be an interesting topic to discuss sometime. I made a list of toxic women in my life and they are feminists, Humanists, and well educated, etc.

So - let's look at the science: Here is an interesting thesis paper on gender differences in subtypes of aggression in the workplace:
http://scholarcommons.usf.edu/cgi/viewcontent.cgi?article=5619&context=etd

Does it matter that the toxic person is a woman?


No. It does not. The reality is that all genders engage in these behaviors. And it's important to know how to neutralize someone who is being aggressive in a passive or indirect way.  It isn't actually helpful to focus on the gender of the individual.

My friend's list of toxic people is probably predominantly female because that is who is more likely to perceive her to be a threat. Aggression is more likely in situations where there are limited resources or competition, they are more likely to occur. If a woman feels another woman is a threat - she might use these indirect methods to control and neutralize that threat.

When we move from examining the problem to thinking about solutions - the gender doesn't matter. What matters is a human is behaving aggressively and we need them to stop.

The solution to this problem isn't more aggression.  It's professionalism and dignity.  I have an entire course on this.
https://humanistlearning.com/passiveaggressivepeople/

Basically - document everything and force their aggression into the open. Make them be more direct as opposed to indirect.  Think of this as counter moves. They are trying to hide their aggression - so pretend you didn't see it and proactively and professionally propose solutions and cc others on the chain.  The more people who can see what is going on - the less a passive aggression person can hide what they are doing.


When you do this - the other person will gradually become more overtly aggressive and that is costly to them which is why they try to hide it.

To learn more - take my course or get the book. Good luck. .