It is very easy to feel overwhelmed when we are constantly being told to be afraid and upset and outraged by the media we consume.  The solution? Stop complaining and start helping. 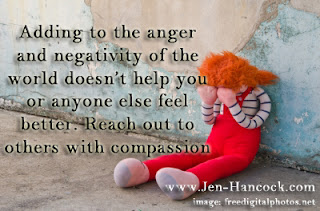 I am a Humanist. I believe people are basically good. It's sometimes hard to believe that when I keep being told negative things about things negative people have done.  But I still believe it to be true.

Why? Because most of the people I come in contact with - from the wide variety of backgrounds they have - are good people.  Most people are good.

I teach how to stop bullying and harassment in the workplace using behavioral science. You would think that would make me focus on the bullies of the world.  But most people who we think are bullies, aren't bullies. Most are good people with issues who are having trouble coping with whatever is going on in their lives.

This doesn't mean that really toxic people don't exist. They do. It's more that - they are actually really rare.

When I do a training in a company - what normally happens is that everyone starts behaving better in an attempt to get the person they are in conflict with - to behave more badly.  The reality is - people allowed their beliefs to bias how they experienced interactions. Believe someone is bad - everything they do is suspect - even if what they are doing is totally normal.

Adding to the anger and negativity of the world doesn't help you or anyone else feel better. Reach out to others with compassion.  Focus on problem solving instead of blaming.  You may just find that you have more in common with other people than you realize. The key - is being open to the possiblity that other people are - good.

So stop complaining about other people and start helping your fellow humans solve their problems.
Posted by JentheHumanist