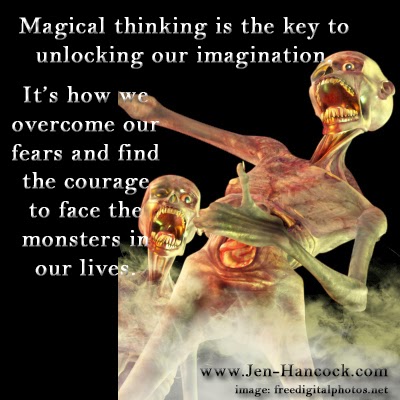 I love me a good horror movie. One with lots of supernatural terror. This may seem strange, since I am a Humanist and a naturalist (note – naturalist is not the same as naturist – the former is about embracing the natural world, the latter is about wandering about naked – as nature intended).

Anyway – while I love contemplating supernaturalism, I don’t worry about it. It’s safe horror fun. Which is why I enjoy horror movies. It’s harmless fun. Mostly.

The problem is when belief in supernatural things exceeds common sense.

I have a kid. He loves to imagine scary supernatural things. But the reason he does it is because he has a good imagination.  And what he doesn’t know, he imagines. And he makes assumptions.

Upon seeing a dark room, he can’t see what’s in it. So his imagination runs wild. Is that dark room empty, like his mom says? Or does it have a Neanderthal in it (don’t ask – geeky kids have unusual fears). And if there is a neanderthal in the room, does it want to eat him? As this point my son doesn’t know and he doesn’t want to find out – so I am called to turn on the light for him – so he can put his fearful imagination to rest and realize – yes – the room is indeed empty.

While this might seem like typical child stuff – some adults do this too. They don’t know something, so they imagine something. Their imagination scares them and they don’t seem to have the courage to turn on the light to find out if what they imagined is real or not. So they assume what they imagine to be real and rather test their assumptions, because that is scary, try to avoid the room altogether.  It’s not a very adult way of dealing with problems is it.

Why do Humanists reject supernaturalism?  Because, we all suffer from the supernatural imagination assumption problem. We all have irrational fears.  When we explicitly choose to reject supernaturalism, we remind ourselves that things aren’t probably as bad as we imagine them to be. It’s unlikely there is a monster in my room and so if I just add a little light of science – I might actually be able to see reality for what it really is instead of how I imagine it to be.

And if I have the courage to face my fears, I may just be surprised by how amazing life can be.

Email ThisBlogThis!Share to TwitterShare to FacebookShare to Pinterest
Labels: courage, dealing with problems, face your fears, fear of the unknown, halloween, horror, how to encourage your child, humanists, overcome our fears, scary thoughts, supernatural, using your imagination