Lectors in cigar factories.lesson in employee wellbeing and community


A lesson in employee well being and community 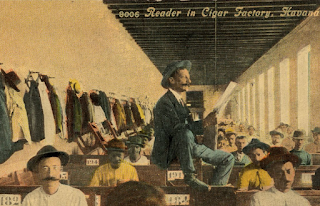 I live in Florida - near Tampa. My son loves to go to Ybor City - which is where the cigar factories were. The history of the cigar factories is interesting. They almost located in my county - which was bigger population wise. But our founding fathers were greed SOBs (the used enslaved labor up until the 1940s - and actually the last slavery prosecution here was in 2005). Anyway - they priced the land too high and the cigar companies located where the land was cheaper - in Tampa.  Tampa grew to be a major city. Mine - is hardly worth noting.

But I'm not here to talk about the negative impact greed had on the development - or rather - lack of development - in my county.

Instead - I want to talk about he practice of lectors.  Making cigars is simple - but tedious. So - the companies allowed workers to pool their resources and hire a lector to read stories and news and other things to the workers to help relieve the boredom. The choice of material was made by the workers.

The lector - helped build community - within the community of workers. It's something they shared together and enjoyed together while they worked.

It's an interesting concept to think about. How might workers today - create community - through shared story telling.