I was asked recently about labels.  The person, a woman, considers herself to be a feminist. But, she also was dealing with the reality that some people view feminism as being somehow misandrist, meaning, anti-male. 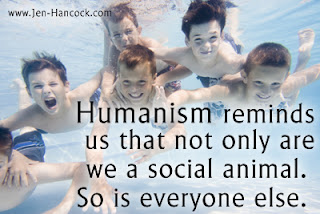 Obviously, being pro-equality for women is not the same as being anti-male but that doesn’t stop the comparison from being made. She was wondering if it might be better to label herself as an egalitarian or a Humanist.

Feminism as activism can express itself in many ways - but at it’s core is the idea that women should have equal rights. Now, there are some women who use the word feminism to describe female superiority - which is not what I consider feminism to be. To me that is misandry not feminism.

Humanists are feminists and if they aren’t, then they aren’t doing a very good job at being humanists.

So what is Humanism? Humanism is the applied study of what it means to be a good human being without supernatural guidance. In other words, it’s a-religious, or without religion or ghosts or anything.

If you are currently considering how to label yourself, please don’t spend a lot of time debating these things. Most people are multiple things and use multiple labels to define themselves. We aren’t just one thing. For me, my humanism (philosophy) leads me to be an egalitarian and a feminist and an activist, etc. Which is a way to say - one label will never be sufficient to define your views. When confronting oppression of women, I am a feminist. When discussing my philosophy, I am a Humanist.

But seriously – if you are concerned about equality – consider learning more about Humanism – because – it may be the philosophy driving your concerns and understanding humanism better will help you articulate your beliefs to others regardless of the labels you choose.

To learn more get my book: Jen Hancock’s Handy Humanism Handbook – or check out my online course about living fully as a Humanist – Living Made Simpler – which is a 6 hour exploration of philosophy, critical thinking, compassion, activism and coping.