Managing conflict in the workplace before it turns toxic

I am the founder of Humanist Learning Systems. I teach how to stop bullying and harassment in the workplace using behavioral science and a focus on dignity and compassion. 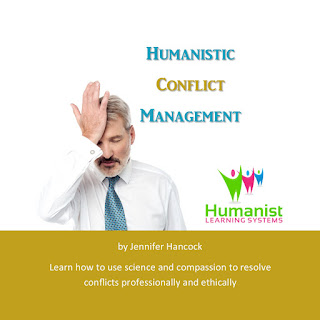 What needs to be done?

First – understand that is totally ok to disagree in the workplace. What isn’t ok – is to turn a disagreement into a conflict.  Disagreements are things you discuss and work through to get to a good solution to whatever the problem is. Conflict is when you decide to not like the person you disagree with and instead of solving the problem, you fight them. Conflict is actually an irrational and emotional response to what should be – just – normal problem solving 101.  People who routinely respond to disagreement by turning into a conflict – either need to be taught collaborative problem solving so they don’t jump to conflict, or they need to be let go so that the people capable of rational collaborative problem solving – can get on with it!

Who needs to handle it?

The managers do. If a conflict arises in a work team, there are a few things that could be happening. It’s up to the manager/leader to figure out what is going on and help redirect the team out of conflict into collaborative problem solving. IF that is even possible. Because – sometimes it’s not possible.  So – what are the things that could be going on?  Welll.

1. You could have a disagreement and the people don’t have the skills or a tie breaker to make a decision so the team can move forward. In which case- make a decision and help the team move forward.
2. You could have a personality that is sensitive and through past experience assumes disagreements are conflicts and so enter fight mode instead of collaborative problem solving mode.  In which case the manager can help coach them into collaborative problem solving.
3. You could have a bullying masquerading as conflict. In which case, you need to figure that out – and get rid of the bully. Bullying is NOT conflict. It’s not a fight. Bullying is bullying. It is one person harassing another person – for no good reason. They might rationalize doing this as – they are in a conflict as if that makes inappropriate harmful behavior ok  - which it doesn’t. Harassment/bullying serves no legitimate purpose.  How can you tell if it is conflict or bullying? By redirecting people into collaborative problem solving.  People who can move into collaborative problem solving are capable of it. Bullies – usually can’t – because the problem isn’t a disagreement. It’s that one is harassing the other because they can. Just – don’t allow the behavior and the person who is doing it – needs to be let go if they continue.

This question is framed wrong.  Conflict isn’t bullying and doesn’t lead to bullying. Bullies excuse their behavior by saying – they are in a conflict – as if that justifies their behavior. It doesn’t. People in conflict – can be talked down into collaborative problem solving. If someone is a bully and they are using conflict to hide what they are doing – then nothing actually triggers this to become bullying/intimidation/harassment. It already is bullying/intimidation/harassment and it’s inappropriate in the workplace.  Heck – it’s inappropriate to turn a disagreement into a conflict. Bullying and rationalizing it as a conflict – is just – really horridly not ok.   Can bullying/harassment/intimidation escalate?  Of course it can. And it will. That escalation is one of the ways managers can know – this isn’t a conflict. It’s bullying. Because – normal people – when they have a disagreement and start to move into conflict – can easily be redirected to collaborative problem solving if they have support for that. People who bully, will bully more and escalate. It’s literally predicted to occur in bullying/harassment situations.

How does conflict impact a workplace?

All businesses are in the business of solving problems. The better you solve problems, the more successful you will be. This is just common sense. What conflict does and – what bullying does – is it prevents problem solving from happening. Instead of a team deciding on the best course of action, teams decide based on who is the most popular or – who is the louded or who dominates meetings. Our goal – should be good collaborative problem solving. Period. Anything that gets in the way of that – or replaces good problem solving with a popularity contest – is going to hurt your business. It’s also going to cause good people – who are really good at collaboration – to leave. And that will also harm your workplace – because all that will be left  - are the bullies.

With retaliation being the biggest fear (and stats showing how common it is) is it worth speaking up?

It may or may not be.  I don’t recommend it unless you have allies above or parallel to the person who is doing the bullying. And notice – we are now talking about bullying – because – conflicts aren’t actually a problem. Because disagreements aren’t a problem. Inappropriate behavior – ie: bullying/harassment is – inappropriate. So – here’s the problem. A bully bullies because it works. They get rewarded for doing it. Basically – they are creating in groups and out groups and by bullying – they can ostracize someone into an outgroup – which gives them power over the group and over problem solving and decision making within the group. When a behavior – that has been rewarded, stops being rewarded, that behavior will escalate as the person tries to get their reward back. In bullying situations – this is experienced as – retaliation. It’s predicted to occur. How bad it will get depends on how long the behavior has been happening and whether the person is doing it adaptively or pathologically as well as how naturally aggressive they are. This is why – unless you have allies above and parallel to the individual you are in “conflict’ with – it’s not a good idea to take this on because – you won’t win and all that will happen is – more bullying/harassment etc. Just – find a new job if you can.  If, however, there are allies, then – taking this on is worth it. It’s hard. It’s emotionally draining. But you will be doing your company a favor by dealing with this and changing the culture for the better. But again – unless you have support and the company will support you through this – no – it’s not worth it because – you won’t succeed. I don’t like giving people bad news, but I do believe in being honest.

What should the typical course of action look like when a workplace is already toxic?

Let’s start with behavioral psychology 101.  Specifically, operant conditioning – extinguishing a behavior.  Extinguishing a new behavior is pretty easy to do – you just don’t reward it or negatively respond to it and it never gets established. Prevention is preferable. Once a behavior is established – it’s exponentially harder to eliminate. This is especially true with humans – because we are free range animals. If one human does not give someone a reward – they will work harder to get it or go get it from another person.  Regardless – the protocol is the same. What has to happen to get a new behavior to not establish is the same thing that has to happen to get an established behavior to stop. So – if a workplace is already toxic – you enact a behavioral conditioning techniques – to extinguish the unwanted behavior.  And you do this by targeting the unwanted behavior and making it not work anymore. Then, you keep doing that until the behavior extinguishes. Which is the simplified way of explaining what needs to happen. In reality – what this looks like  is – you eliminate the reward for the unwanted behavior. You train up new behaviors. You go through a change process, and reward the collaborative problem solving and just keep at it.  What normally happens is that almost everyone – likes the changes and are happy with the new way of doing thing. Usually one person – just won’t get with the program. Either encourage them to leave or fire them. Takes about 1 ½ years if done right.  And yes – I’ve done this. I was hired in to do this at a nonprofit. We had toxic volunteer staff relationships. Volunteers thought their job was to spy on staff. Staff didn’t want to deal with volunteers who were spying on them. We reset the relationships. Retrained the volunteers. Assigned them staff partners and fostered collaborative relationships. 9 of our 10 volunteers LOVED it. Staff loved it too once their trust levels went up. One volunteer – the toxic one, just refused. She fought, spread rumors about me. Tried to get me fired and eventually – we fired her. And then she spread some more rumors about me and fought some more. She was gone in 6 months and her influence over the organization was over in 1 year. From their – we could build up the program. In 3 years we went from 10 volunteers with toxic relationships to 200 volunteers donating 20,000 hours of time a year and helping every department within our organization. That’s the equivalent of 10 full time employees.  They key – resetting towards collaboration and not tolerating conflict – not by fighting about conflict, just – keep redirecting to collaboration. The only reason I succeeded – or rather – stayed and kept at it – was because upper management supported me and begged me to keep at it. Had I not had that support, things would not have changed.


What about when it's on the verge of turning toxic?

Redirect to collaboration. Things will only turn toxic if someone isn’t capable of collaboration.  You can use the same behavioral approach. Remove the reward for the unwanted behavior – conflict. And reward collaboration. Actively. Be aware that the individual in question – might already be wielding a lot of power and likely has been doing these behaviors successfully before they got to you. If that’s the case – then removing the reward will cause them to escalate and fight. Just keep focusing and rewarding the behavior you want – collaboration and don’t allow the person engaging in “conflict”/bullying behavior to succeed.

Hope this helps. Again – I train on this approach and have both individual course and a conflict bundle - https://humanistlearning.com/category/bullyingharassment/