Voluntary Desire to Do and Be Good

I want to share a philosophic/theological idea that I find very exciting.  And yes, I know - the idea of theological within a secular humanist concept - seems odd - but it will make sense. I promise. First  - a little bit of background.  I have been volunteering with the International Humanistic Management Association. I help facilitate a monthly discussion on humanistic management for professionals http://humanisticmanagement.international/humanistic-management-professionals/

One of my colleagues is Manuel Guillén Parra (https://rcc.harvard.edu/people/manuel-guill%C3%A9n-parra). He is organizing a multi-year learnership workshop - http://humanisticmanagement.international/humanistic-management-workshop/

He is also writing a book about human motivation. It expands on the work of Abraham Maslow. Maslow was a Humanist psychologist and is most famous for his "hierarchy of needs." 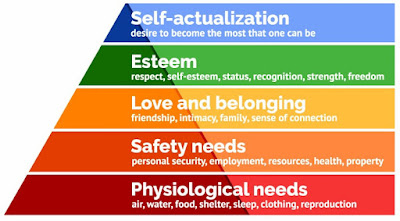 He and I have been chatting to discuss how to express these concepts in ways that are universally understood by everyone regardless of belief or non-belief.  We are doing this because he is Spanish Catholic and I am American Atheist/Humanist. So - if we can both agree on the language - it will most likely be universally understood to all humans regardless of belief or non-belief or cultural orientation.

His basic idea is that in addition to the internal and external motivations - humans also want and desire moral good. This is the level most people think of as spiritual and religious. The concept of good has many dimensions.  Useful good, pleasant good, moral good and spiritual good.   His model incorporates the idea that we all want to give and get these various types of good.

One of the terms he was using to explain spiritual/religious motivation to do useful good didn't make sense to me - because he was using sectarian religious language to describe it. So he was explaining what he means using - non-religious language so I could understand it and so he can write his book in language that is universally understood - and he said that this is about voluntary desire to do good - useful good.

Here is what I wrote him after contemplating it for a while.

"I was so energized by the idea of voluntary desire – and the various goods. I realized – or thought.  Voluntary desire – that is a state of spiritual enlightenment.  When you have that state – the act of doing good – becomes an act of devotion. It is elevated.  People do good all the time, but when you are motivated by voluntary desire – spiritual enlightenment – your acts become devotion. Those 2 things, combine to create a state of being that is the state of connection. I would describe it as feeling connected to life, the universe and everything and everyone.  You probably describe it as feeling connected to God.

When I talk to people about Humanist morality – I tell people – it is not enough to want to do good. You have to do good acts in order to BE good.

Wanting to do good, leads to doing good acts, which leads to being good - which is a state of being.

In other words, Spiritual Desire leads to Acts of Devotion which leads to a connected state of being.

It’s awesome!  It's why practicing Humanism helps me feel so connected to everything. "

And that's where Humanism comes in.  Humanism isn't atheism.  It's a necessary part of my practice as a Humanist, but Humanism is a philosophy.  It helps me make sense of the things going on around me and helps provide me with a moral framework to think about who I am and more importantly - who I want to be.   Manolo and I are kindred spirits. Coming to the same place through totally different religious journeys. We both love love. And our fellow humans.

Let's not get so caught up in religious specifics that we lose sight of our common humanity. To me - that is the most important lesson of Humanism.
Posted by JentheHumanist