Nothing is inherently immoral 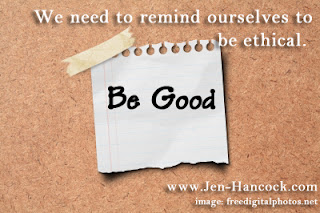 Humanist ethics are situational ethics. And this makes a lot of people nervous. But it shouldn’t.

Humans all value the same things – for the most part. We value justice, compassion, and responsibility for instance. Studies have shown that there is indeed a common set of widely held human values.


Where these values come from is a matter of debate, obviously. But to me, as a pragmatist, I’m less interested in why we have these values than on how we apply them.  This is why I’m an advocate of situational ethics.


The reality we all face is that while we share common human values, those values are often in conflict with one another. Also, as individuals, given our personal experiences and beliefs, we may value some values higher then we value others.  We are constantly weighing our values to come to what we think are ethical decisions. Even if we don’t realize we do this – we are.


All situational ethics is, is an explicit acknowledgement of the reality of how we humans go about making moral decisions. The reason we do this is so that we can more effectively balance our moral values when making decisions.  We do this because it seems to yield better more moral decisions as judged by the real world effects of our decisions. We do less harm inadvertently when  we take such an explicit approach BECAUSE we considered the possibility that we might do harm while trying to do good.


I started this essay by saying nothing is inherently moral. But that doesn’t mean that anything goes. It just means you have to THINK through the potential consequences of your actions before taking action to insure your decisions are good and moral and will do the most good and least harm.


And this brings us back to the topic of leadership. Want to be a good moral and just leader?  Take the time to think through your actions to ensure you actually do good because good intentions aren’t enough. They never are.  Moral reasoning is hard. Put some effort into it.