The Simplicity of Morality

Why shopping carts are objects worthy of moral contemplation. 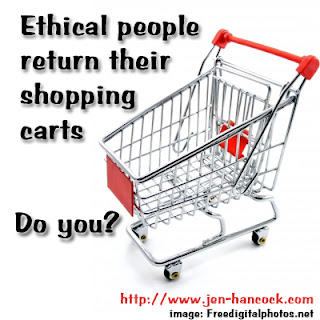 Anyway – I have written about shopping cart morality before – here: http://humanisthappiness.blogspot.com/2012/04/shopping-cart-morality.html

One of my followers, Andy had this to say about my theories on shopping cart morality:

“I not only return my cart, but other people's. I never really thought of it as a moral activity, just not being self-centered and lazy. But I suppose when you get down to it, not acting as though you're doing the world a favor by existing and everyone should cater to your whims is probably a moral stance. Or at the least the result of a stream of ethical thoughts.”