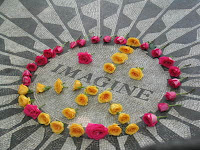 Today is the 30th anniversary of the great sage John Lennon’s death. Yes, I remember where I was. Yes I still have the newspapers that announced his death. Yes, that does date me. Regardless. His philosophy of life moved people, which is why we are still mourning his death even after 30 yrs have passed. While I don’t think he labeled himself as a Humanist, it is clear that he pretty much was.

I have always considered the lyrics “Whatever gets you through the night, it’s all right. It’s all right.” to be a bit of a personal motto when it comes to reminding myself that it is ok that other people don’t believe the same things as I do. It is a message of not just tolerance, but of acceptance. That it really is alright is a powerful thing to remember.

Finally, as pretty much everyone knows, his song “Imagine” is the finest statement of Humanist beliefs ever put to music. John - you are missed but not forgotten.